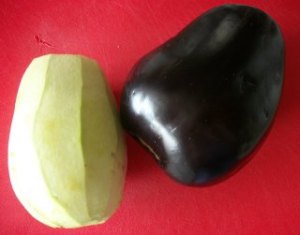 Up until recently, both my husband and I HATED eggplant.  There really was no other way to put it.  Now those of you who know the wonderful virtues of the eggplant might be wondering why and shaking your head at the idea of us hating eggplant but those are probably the people who didn’t have mothers who ruined the idea of ever eating eggplant again for the both of us.  Both loved to serve it mushy and oil soaked.

Well I’m trying to put more veggies in our diet and  to eat less meat, so I’ve searched out new recipes and ideas to exchange the meat with.  No real surprise eggplant kept coming up (not to mention much touting of the benefits of eggplant).  Soooo…I decided I was going to try to cook a couple of eggplant dishes.  After all, I’m a better cook than my mother, so I was pretty sure I could make it taste good.  My husband looked at me like I was crazy but agreed to at least taste the dishes I made (he is good about being my tasting guinea pig).

I first tried out the traditional eggplant parm; how can anyone go wrong with a lovely tomato sauce and cheese?  I changed up the cooking methods to make sure it wasn’t oil soaked and baked the bread coated eggplant instead of frying it (next time, I’m leaving the breader off it).  It turned out awesome!  We both loved it.  I’ll share that recipe later after I’m done tinkering with it.

With more searching online, I found an interesting recipe for Eggplant Sandwiches on the Allrecipes site (one of my go to recipe and tip hunting places, I love all the reviews).  When I put it in the week’s menu, my husband immediately said no way.  But after I described the recipe and what I intended to do, he agreed once more to try it and stop trying to convince me to cook something else.

After looking at the recipe, I already saw changes I wanted to make to “make it better.”  LOL, I’m not one to leave a recipe alone, instead I’m usually switching up things to make it much tastier.  It’s one of those recipes that is perfect for a summer evening out on the balcony and for using eggplant, tomatoes and basil straight from the 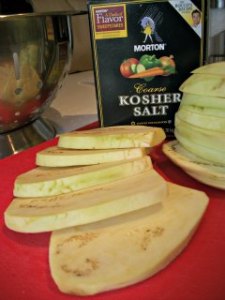 garden.  For now, I’ve only used the traditional purple eggplant but have plans to explore the other eggplant options in the future, including growing my own in my veggie garden (eggplants are beautiful in container gardens, so I’m thinking my balcony may end up with eggplant on it next season).  Since I was using eggplant from the store, I peeled (don’t need to  for young eggplant) and sliced them into about a half-inch thick slices, then salted them for a bit to draw the moisture out.  Sweating is one of the main tricks to cooking eggplant and keeping it from absorbing so much oil (it also draws any bitterness out of large eggplant).  Pulling the extra moisture out also helps with the eggplant being firmer after cooking.

Now I do believe grilling the eggplant will give the best flavors but I’m dealing with a broken ankle, so dealing with the grill has not been on the menu lately unless the hubby is doing it.  I broiled mine instead with a little 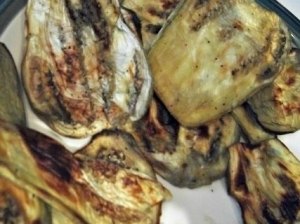 olive oil and some black pepper (no need to add anymore salt because the eggplant absorbs some while sweating).  After cooking, I layered the eggplant on focaccia bread (freshly made at my house and seasoned with dried thyme, basil, oregano, marjoram and lemon zest) and spread with a lemon-garlic aioli  then added slices of fresh tomato and mozzarella cheese and tossed the sandwiches back into the oven for the cheese to melt.

After pulling them out of the oven, I added fresh basil and a sprinkle of feta then closed them up and served.  My husband gave his a look, decided it looked yummy and took a bite.

His face relaxed as the flavors of the eggplant combined with fresh bread and garlic, tomato and basil hit his tongue. Then the stringing mozzarella finished it off.  These sandwiches are not only good, they are awesome!  Neither one of us missed the meat at all; not with these sandwiches packed with so much of the wonderful summer freshness and flavors.  Eggplant Sandwiches are now a regular request in our house.

Here’s the recipe with all my changes for those who want to add a wonderfully YUMMY and EASY eggplant sandwich including the lemon-garlic aioli to their diet.

Sweat the eggplant slices with salt for at least a half an hour before cooking.  Rinse the slices in water to remove the extra salt and allow to dry.

Either preheat broiler in oven or grill.  Brush the eggplant with the olive oil and put it on a baking sheet (if using the grill, directly on the grates is fine).  Place about 6″ from the heat and cook until tender and toasted, flipping once.  About 5 or 6 minutes on each side.

Toast rolls and spread with the lemon-garlic aioli.  Then layer on the tomatoes and mozzarella cheese slices.  Toss the rolls back under the broiler to melt the cheese.  Add feta cheese and basil leaves and serve.

Juice from half a lemon

Combine all ingredients and place aioli in the fridge for at least a half hour before using for flavors to meld.