Healthy and tasty are not two words most people think of together but I have finally put together a chicken pot pie recipe that is both without losing any of the wonderful yumminess of the gravy. 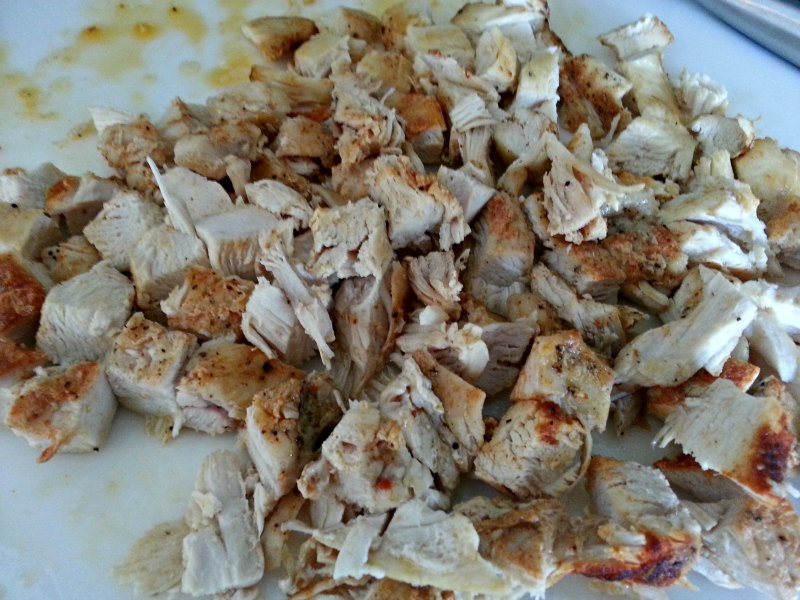 I love chicken pot pie but I rarely eat it because it’s usually loaded some sort of fat to make the rich creamy gravy and the biscuit or crust or the veggies are completely overcooked and mushy.  They always taste good but I get left with the feeling over them being heavy and feel a little guilty after eating one or just hate the mushiness.

Last month, it was snowing again.  We got a lot of snow in April here in Denver and skipped spring.  The trees still don’t have leaves and it’s already the second week of May.  I’m really bummed about it because spring is my favorite time of the year and this year everything got froze, so no pretty flowers.  Anyway, sitting around watching it snow, I wanted warm comfort food and what makes better comfort food than chicken pot pie?!

Because we had been stuck inside so much, I also wanted a low-fat pot pie since we weren’t getting out as much as we like.  Ahhhh, the challenge!  I love a good challenge.  You could say I love them so much, it often drives my husband crazy because I’m a bit like a dog with a bone, I don’t let go until I’ve solved the problem or figured out a solution.

Since I didn’t feel like running to the store, I dug around in the freezer and used ingredients I already had on hand.  I must admit I’m glad I had what I did because all the veggies, herbs and chicken combined so well, I plan on making this my go-to chicken pot pie recipe from now on.

I used a frozen mix of corn, green beans, carrots and green peas (I like to use frozen because it helps to keep them from overcooking).  Them added fresh leeks, potatoes and garlic, finished with chicken breasts, dried French tarragon, ground white pepper and smoked paprika.  Plus some of my homemade chicken stock.  I topped it all off with a whole wheat pastry crust on-top only to reduce the amount of bread.  It was YUMMY!

I thought I would miss not adding at least milk but the chicken stock thickened with flour was beautiful.  The seasonings and flavors all came together to form such a party for my taste buds.  It was mellow and comforting as chicken pot pie should be but had just enough white pepper in it to give it the slightest kick.

And the crust on top, was rolled out so thin, that when it baked, it became this crispy, crunchy goodness that I broke up with my spoon and stirred into the mix for added crunch and texture.  Over all, I’m thrilled with the new recipe and think you’ll love it to.  Just remember you are always welcome to switch up the ingredients for things you have on hand or prefer over others.  Enjoy!

Salt and pepper to taste

2 cups pre-cooked chicken breast, shredded or cubed (I did mine in some olive oil, seasoned with paprika, garlic and onion powder, salt and pepper)

Make crust before you start the potpie filling.

Place the flour in a mixing bowl and add shortening.  Cut in the shortening to the flour until the mix resembles small crumbs.  Add the water a tablespoon at a time until the dough holds together well.  Do not over mix or you will toughen the crust.  Work into a ball, wrap with plastic wrap and place in the fridge to rest while you make your filling.

Heat olive oil in a large skillet over medium-high heat.  Add the leeks and cook until they start to soften, about 4 minutes.  Add garlic and cook until fragrant.  Add flour, white pepper, tarragon, paprika, salt and pepper to the pan.  Mix well and cook for about 2 minutes. Don’t skip this step or your pot pies will taste like flour.  You have to cook it to get rid of the floury taste.

After cooking the flour mix, slowly add the chicken stock, stirring to remove any lumps.  Continue cooking until gravy has thickened to your desired thickness.  Remember if you over thicken, you can always add a little more chicken stock or water to thin again.  The gravy will thicken more as it cooks in the oven, so leave it a little thinner than you want for the finished product.

Once the gravy is done, remove the pan from the heat and stir in the frozen veggies, chicken and potatoes.  It’s time to make your pot pies.

Roll out your dough onto a lightly floured surface.  The thickness is up to you, I like a thinner crust because it gets crunchy and crispy.

Lightly grease 6 large ramekins or a large baking dish and pour the potpie filling in.

Cover your dishes with the crust, sealing the edges well and don’t forget to cut a slit or two into the top to allow steam to release.  Brush the tops with the egg wash.

Place into the oven and cook until bubbly and golden brown on top, about 20 minutes.  Allow to rest at least 10 minutes before serving.