While this is not a recipe post, avoiding food poisoning is so important at any time. Including when you travel. Not only are you in a new place, but dealing with the side affects of food poisoning is nasty. It can ruin a vacation or any experience. I’ve had food poisoning so bad from a couple of restaurants I can’t even eat the dish made by anyone else, including me, again. This post is another re-post from Bags & Biscuits.

One of the nasty side effects of traveling is food poisoning from eating and drinking.  It happens to everyone, especially the adventurous who enjoy sampling local foods. Sometimes we have to ask ourselves was it worth it and most of the time, the answer to yes.

Saying that David and I were a little culture shocked by Morocco is an understatement. Especially for David! I think he forgot we were traveling to a third world country where things are very different. Having been to Mexico, I had a small inkling of what I was getting into. Small being the operative word. It’s one thing to visit for a weekend, it’s another to live in it for a while. It’s also different from the tourist areas to where the locals live.

It’s not uncommon to see raw sewerage, antifreeze from auto repair shops and other unknown liquids seeping around in the streets, close or under the boxes of produce. Not to mention, flowing down the river areas. The same rivers where the city water supply comes from. 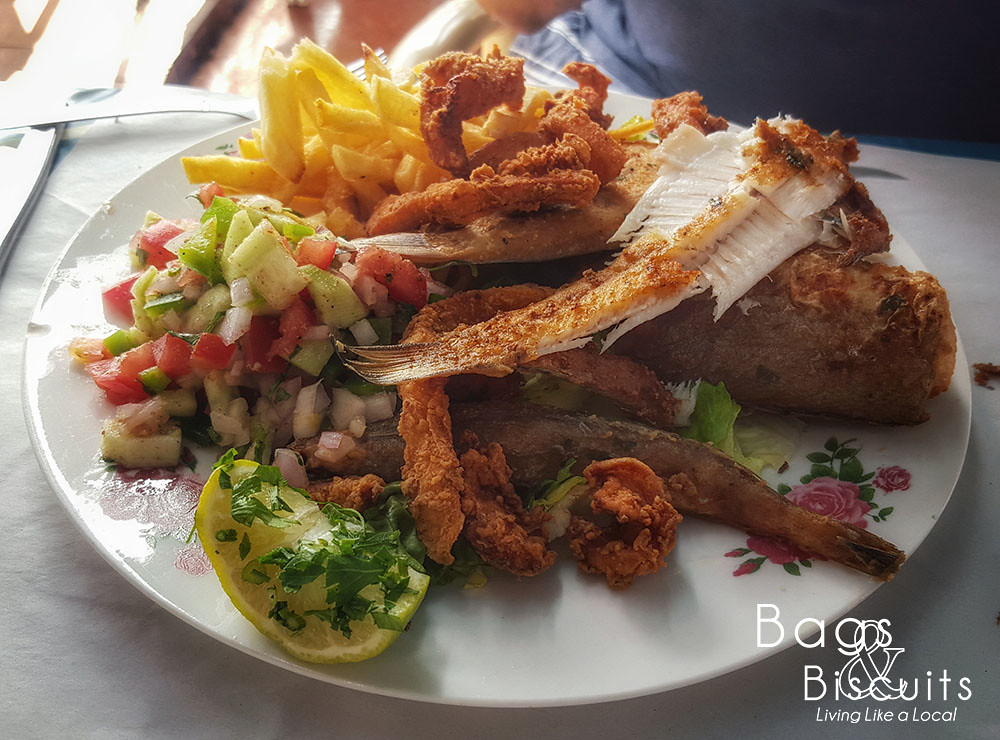 A yummy fried fish plate from a clean restaurant in Taghazout, Morocco.
Food sanitation was one of the hardest things we dealt with. Eating at restaurants is a crap shoot. Hot water is rare in both restaurants or homes. In fact, the shower is often the only hot water supply in a home and many restaurants only use cold water.

In some ways, the open restaurant kitchens of Morocco are fun because you can watch your food get cooked. In other ways, it’s just plain bad because after I’ve see the food preparation and handling food, my stomach turns from what I see.

I’ve seen the wait staff/cook grab plates off tables from finished customers, step behind the counters, wipe them down with a towel and replate for the waiting customers. And that same cook goes without washing his hands from cutting up raw meat, to handling the salad he’s serving on the plate. Or scratching his balls! I can’t tell you how many times I’ve seen a server rubbing his crotch and then picking up plates to serve. UGHHH!!!

And the stray animals hanging out in many of the restaurants waiting for handouts. They are cute and I’m guilty of giving them scraps of food because I hate to see a hungry animal. But, we actually had to stop going to one restaurant because every time we left there, both us had flea bites.

Buying food is also an adventure. The meat vendors display their meat hanging out the front of the shop, in the full sun for most of the day. They also take your orders, cut up the meat, bag it, take your money and hand you change, all without a pause for washing the hands.

It’s all a learning experience. You soon realize what will potentially cause food poisoning and what won’t. You also come to understand, that maybe our sanitation levels in the US are a little too high and you really can do with less, without getting sick or dying. I’m still deciding if that’s a good or bad thing.

Using common sense is the easiest way to survive. Maintain you own personal hygiene, such as washing your hands. If the restaurant looks unclean, don’t eat there. Unless you know the restaurant’s practices, don’t eat under cooked meat and avoid the salads. Did you know that salad greens are one of the most common sources of food poisoning from any restaurant, anywhere in the world?

While I use eating in Morocco as my example, these tips for helping to avoid food poisoning while traveling, work for anywhere in the world, including modern Western countries. 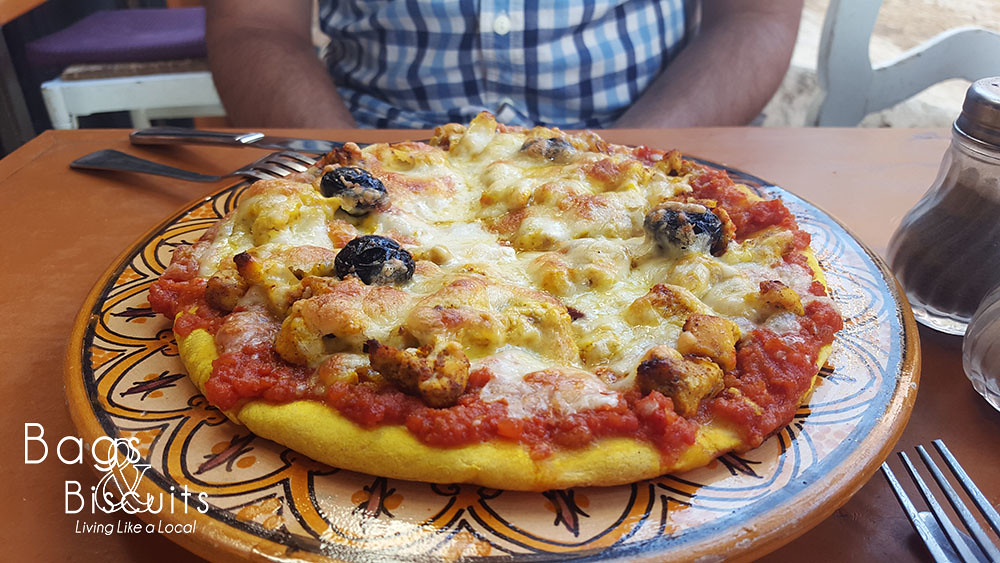 We’ve had less tummy issues when picking the restaurants where the locals eat, rather than those in the tourist areas. Yes, it will be a little more uncomfortable if you don’t know the language, but the food usually tastes better and is more authentic. Use your Google translator and get good at pointing. There’s no shame in it!

Pick crowded restaurants and try to always eat at the local meal time. It means the food is fresh and not sitting around. Sitting food equals more harmful bacteria. Look around and order what everyone is ordering. Once again, it will be the fresher food.

And while I have eaten salads in restaurants in Morocco, I am playing Russian roulette. Cleanliness is an issue, prep and if they are keeping the ingredients at a cool temperature. We recommend not eating uncooked foods at restaurants, unless you are willing to accept the risk. 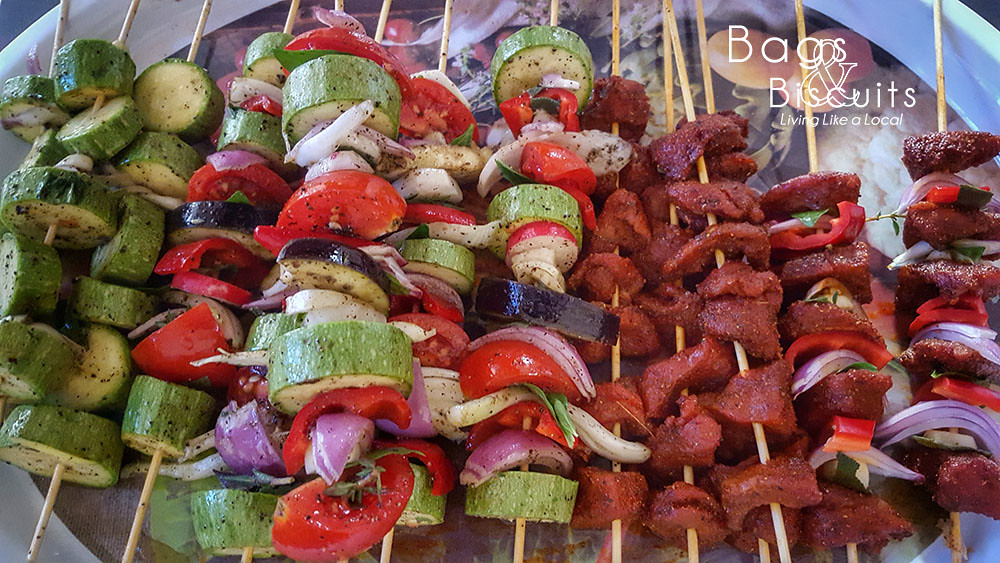 Kabobs ready for the grill, using only local meat and veggies

Eating in has been our savior in Morocco. It gives us freedom of deciding where to buy our food, how we handle and prepare it. We select the cleanest meat vendors and buy fresh fruits and veggies directly from the farmers. It cuts out all the middle men from handling the food. Less handling means less exposure to bacteria.

I don’t use special fruit/veggie washes for cleaning. I only use tap water and a rough kitchen scrub pad (the water is heavily chlorinated). I also don’t follow the rule of only eating what you can peel or crack out of a shell. I really think we’ve had such good luck with our food because of buying locally. So far, we’ve had no food poisoning in Morocco from the fruits and veggies cleaned, cooked and eaten at home. And we’ve eaten spinach, lettuce and strawberries, which are some of the worst foods in the West for carrying bacteria. 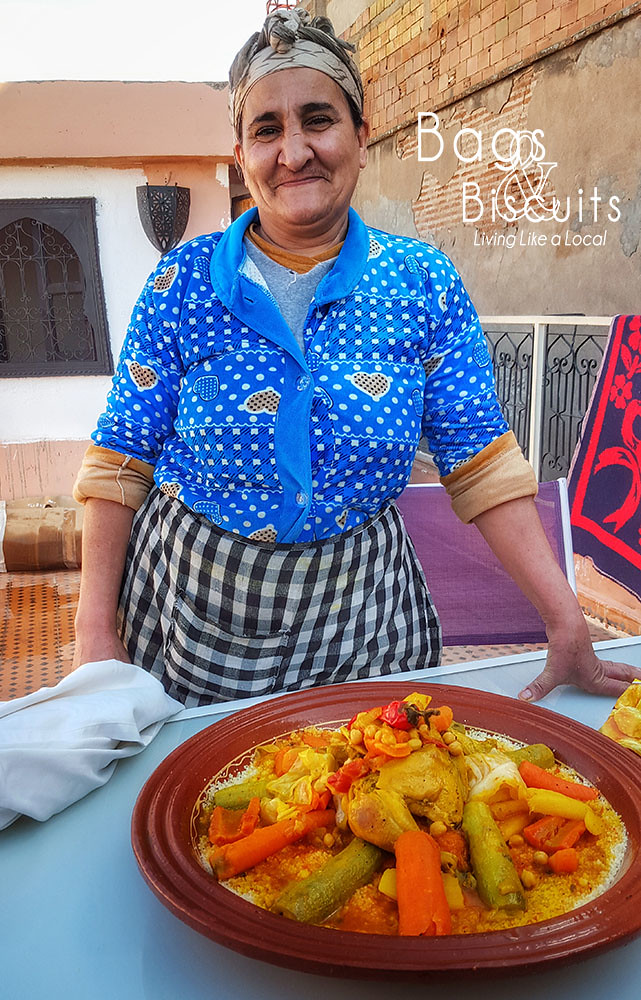 Couscous made by our Marrakech neighbor

So far, we’ve had no tummy issues when eating food cooked by a local cook. Many of your neighbors are happy to prepare food because it brings in a little extra money. You get the benefits of a home cooked meal prepared completely authentic. And the meals are cheaper than in the restaurants.

If you’re in a hotel, ask the front desk clerk or the maid if they know someone who is willing to prepare food. Chances are you’ll easily find someone. And because these cooks want you happy, they tend to carefully cook up yummy local dishes for you.

Just don’t forget to let the cook know how happy you are with the meal. It’s amazing to see the smiles and watch their eyes light up when you express appreciation for their cooking. Just do remember to get an agreed upon price ahead of time.

Some places have treated water out of the tap, some don’t. Regardless, in Morocco, we drink bottled water. Partly because we’ve seen the water source and partly because it’s treated with so much chlorine, not only does it not taste good, but it is probably pickling our insides. Bottled water is really cheap in Morocco. A 5-liter jug costs about $1 USD. We buy the big ones and fill up small ones to carry with us while out and about. This helps with not using as many plastic bottles, which is a major issue here in Morocco.

I cannot express the healthy benefits of eating yogurt while traveling enough. Or even in your regular home life. Yogurt introduces live bacteria to your system that help with digestion and keeping you healthy. We’ve found eating yogurt regularly is one of the best ways to help avoid tummy issues while traveling. We’re human and occasionally we don’t

As an extra tip, try to avoid the ones loaded with sugar. While still good for you and better than not eating it, the amount of sugar added to yogurt is disgusting and unhealthy for the body.

By following these tips, we avoid having many stomach issues. Unfortunately, tummy issues are one of the less appetizing parts of travel, no matter how careful you are. But you can do things to reduce them. The only option is to not eat anything but prepackaged food and that is something we’re not willing to do. We love food and we enjoy tasting the local flavors cuisine. As a result, it’s a risk we are willing to take. 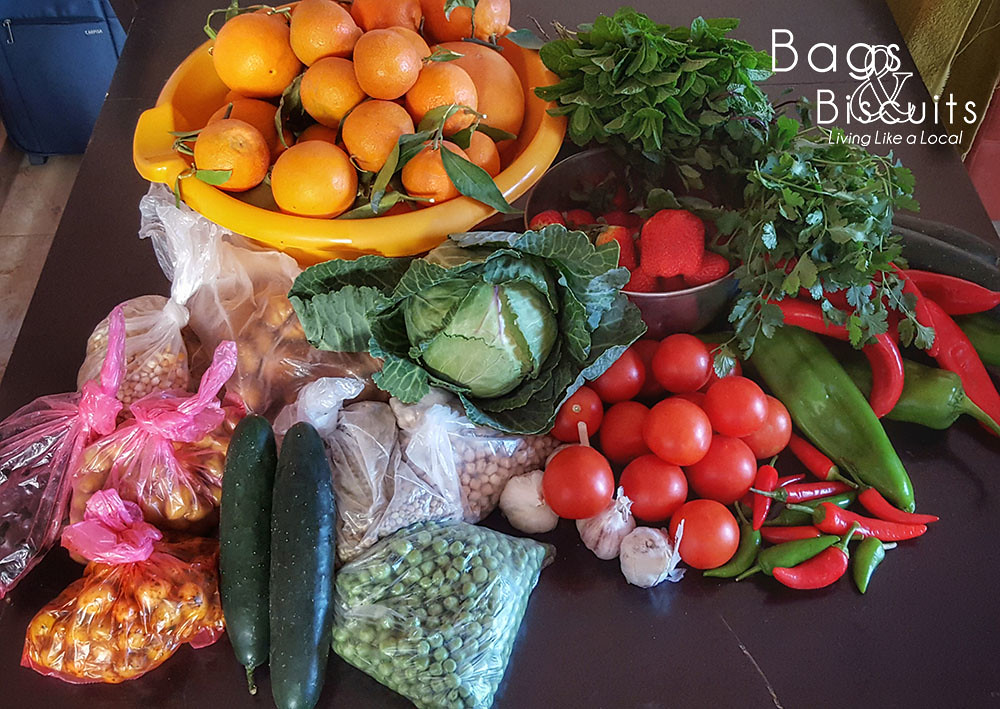 Weekly loot from the souk in Tamraght 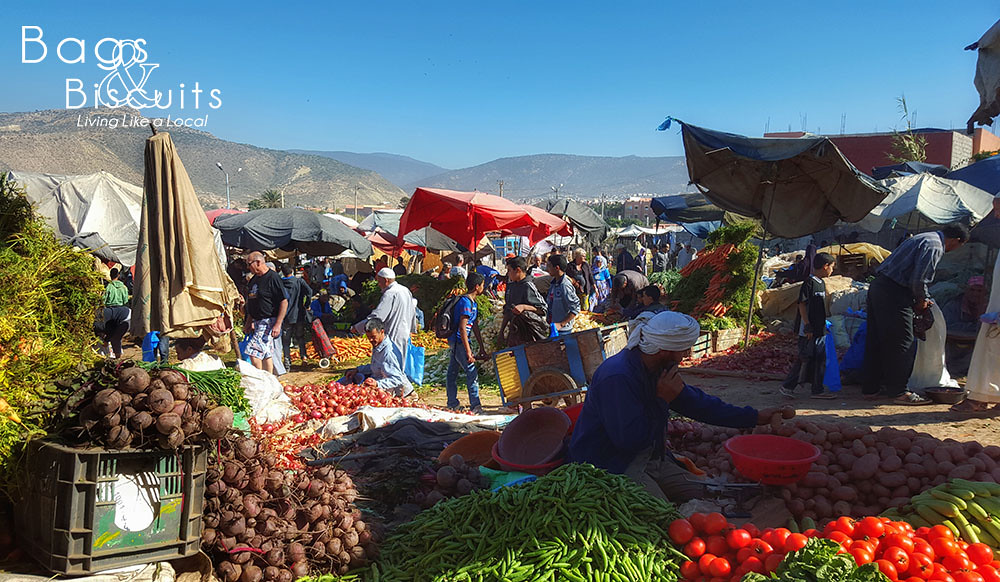 The weekly souk in Tamraght where we purchased our fresh fruit and veggies directly from the farmer.